There is a popular saying in Silicon Valley: there are developers whose work has an impact ten times (10x) greater than that of an ordinary programmer.  If we want to fix the Puerto Rico Fiscal Crisis, we need a 10x quality technology team.  Consider composition of a champion basketball team, the Golden State Warriors:

Tim O’Reilly references how sports teach us the extraordinary impact that a superstar can have on the success of a team. To be successful in sports and in business requires a team of people who can work together to achieve extraordinary results.

Such an effort demands a team of people who can work together, and who are superstars in technology and in application development. Just as Michael Jordan enables greatness in his team, a subject matter expert of superb skill  provides an environment in which his/her people can produce their best work–be it someone who works in finance or someone in sales or operations. Success breeds success no matter the field.

In this article, I will point out some of the challenges a PR fiscal control board would face.

Did you know that there is a pilot project via which one could see the financial statements for CRIM, ACAA, Public Works and UPR?

Although not finalized, if the internal processes of each corporation are working correctly and capturing the necessary data, the application does work. We were able to do it because there was a team of technical “all stars” who took on the problem.

This screenshot is based on the idea of creating a “center of excellence” for financial services. It uses images from the pilot application to give a idea of what a dashboard might look like. 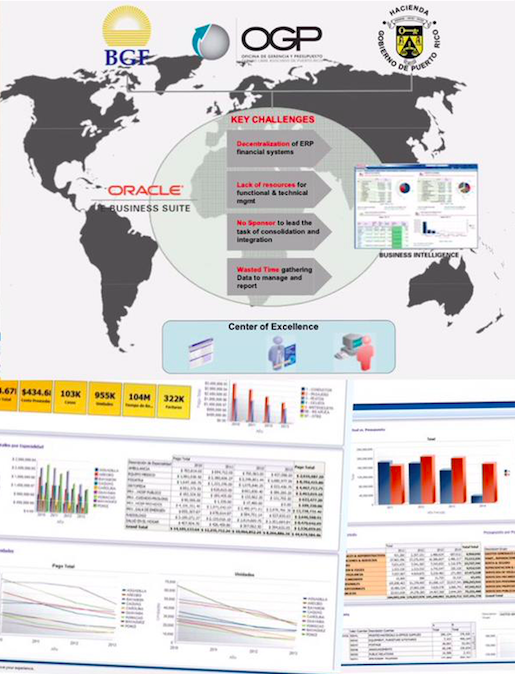 How did the project come about?

In September 2013 the Office of the Chief of Information (OPEI) initiated a process to review all systems of Oracle E-Business Suite (EBS) that were installed in public corporations. Thanks to consulting time that had been included in 2013’s contract renewal, for the first time we had the necessary resources to evaluate and understand the state of the agencies’s then-present systems. As such we could finally visualize how help solve problems effectively and centrally.

The initial work took place from September 2013 to December 2013, and included visiting a total of 16 public corporations that use Oracle EBS. The team of software engineers assigned to the project were of the highest caliber that Oracle had to offer, with no margin allowed for failure–what I call “the best for the job, period.” This group worked with the agencies primarily to gather information, but in some cases were able to immediately stabilize existing problems their analysis had revealed.

These issues existed in ALL the agencies.  This table lists the issues faced by every single public corporation: 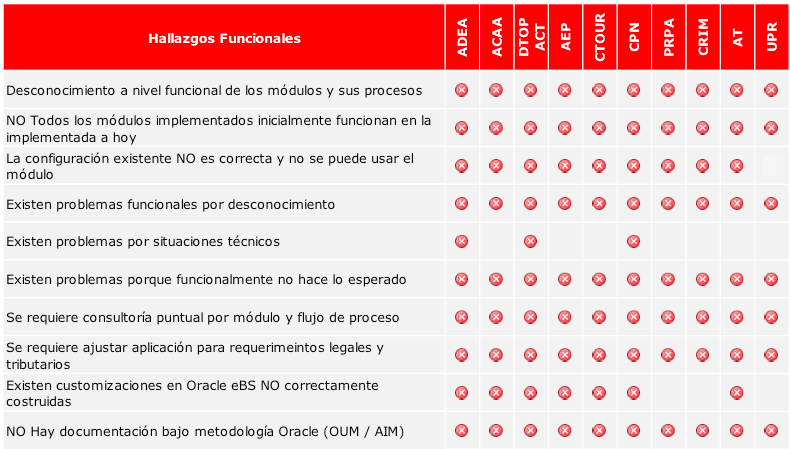 In February 2014, shortly after completing this analysis, an article about the alleged waste of millions of dollars was published. The headline reads roughly: “Comptroller signals that millions were ill-spent at UPR on Oracle.”

Here is what I thought when I saw the article in CyberNews/Noticel:

There must be a way to prevent something similar’s happening at the other 15 installations, to adopt better practices.

So how do we solve it?

To do so we have to understand first why it happens. I’ll explain what I mean in a simple chronological example:

Meanwhile, the truth of the matter is that the software isn’t performing well, and what you’re really paying for is to put out fires while trying to figure out what’s actually wrong.

This is what happens in every public corporation in Government and it is the reason why fiscal information is not available in real time for Puerto Rico.

If the government identified and recruited “the best for the job, period” they could stabilize and correct the issues with minimal fuss. In the case of the financial reporting for the public corporations, the fastest and most efficient is an Oracle team–Oracle employees–working off a joint plan, on a centralized infrastructure for financial systems.  This implies eliminating contracts to third-party “partners” unless it is absolutely necessary. Such a centralized infrastructure setup–Hacienda and DDEC have the resources–would significantly reduce equipment costs, energy, administration, support, training and development. Estimated savings by consolidating systems is between $7-10 million over five years.

I urge all government leaders to pay attention to what the President Obama has done in recruiting technology talent in the United States Digital Service.  There is a great TED about this by Haley Van Dyck, US Digital Service co-founder:

You can see more detail about it here. We need a public policy–supported in law–that will allow the unit head to hire the best person for the job, thus allowing for ‘agile’ development of products and services.

Back to Puerto Rico

I never had the necessary legal powers to go to public corporations and force them to work with my office. I did have the power to go to each to help them solve a problem. When you have something positive to offer, people are willing to work closely. Our collaborations with specific public corporations (ACAA, CRIM, UPR and AEP) went very well. Even lacking a law that required cooperation, we could have kept going to all remaining public corps and solved the financial reporting problems, but we simply didn’t have the resources to do so.

Bottom line: If you can identify and solve problems, and have good relationship with agency leadership, doors will open and things will get done. It’s that simple.

I am sharing this story because, frankly, Puerto Rican citizens need to know why  the financial systems (and other problems) are not resolved and should demand that those problems be addressed in the most effective manner while being as cost efficient as possible.

Our biggest weakness would be to surrender when facing a significant problem. The surest way to stand out is to try again one more time. We need our candidates for government to present initiatives and structures that encourage recruiting “the best for the job, period”. That was the idea of PR Senate bill 614. It is what President Obama did with the United States Digital Service, and we should follow the example.